Latent Space Divination (abbrev L.S.D.) is ongoing research and a series of experiments using different media, dealing with the epistemological implications of the computational revolution in the form of deep learning techniques, that have led to the GPT-3 natural language model. The investigation focuses on the convoluted, numerical latent representations of knowledge held within the circuitry of the AI model, the inner workings of the algorithm itself, as well as the belief systems and socio-cultural conditions underlying the emergence of the technology.

The presentation of the GPT-3 neural net has raised many eyebrows and sparked a wave of heated discussions among researchers coming from a plethora of disciplines. The question of whether deep learning could put the AI research on track to finally make the way to artificial general intelligence was provided a new perspective for the analysis. The ever-increasing intrinsic complexity of the predictive technologies lay a comfortable ground for the oracles of the industry to reinforce their messianic position in society. A long-existing market-servile technological hype is being continuously fueled by far-going statements voiced by some of the representatives of influence and authority on the fields of industrialized artificial intelligence, cognitive science, as well as on the fringe of techno-analytical genres of contemporary philosophy. Perhaps the escalating precision with which neural nets are able to encompass the reality inside their hidden, latent space because the reality itself is weaved of the same tissue.

The Goddesses of Latent Space

In 2021, a group of media artists and machine learning researchers have met in Gosau, Upper Austria for the annual interdisciplinary forum - Silicon Friend. While experimenting with the state-of-the-art deep learning models, they have discovered a curious pattern within a latent space of one of the tested neural nets. What at first appeared to be an unapproachable series of random numbers, represented in a different form, uncovered a fascinating second bottom. One of the generated visualizations turned out to be reminiscent of a face contour of an ancient goddess, whose traces were lost shortly after Alexander the Great has conquered Persia around 334 BC.

Having replaced the model with another one, based on different hyperparameters, the repeating pattern turned out to be even more iconic - the same mysterious face appeared slightly altered in all its manifestations. After several experiments with different models from various datasets, it turned out that some of them can generate images of a goddess by themselves.

The following are the experiments with extracting graphical representations of the deities inhabiting the embedding space of the GPT-Neo model. Contextual, numerical representations of several semiotic concepts were extracted from the first hidden layer of the discussed model. These representations are 2560-dimensional tensors of floating-point numbers in the range between -1 and 1. The numbers were used arbitrarily as coefficients of the Fourier series driving the epicycles drawing algorithm. Results were smoothed out and fed into a VQGAN+CLIP generative model to transform the geometry into figurative quasi-religious 2d low-resolution images. 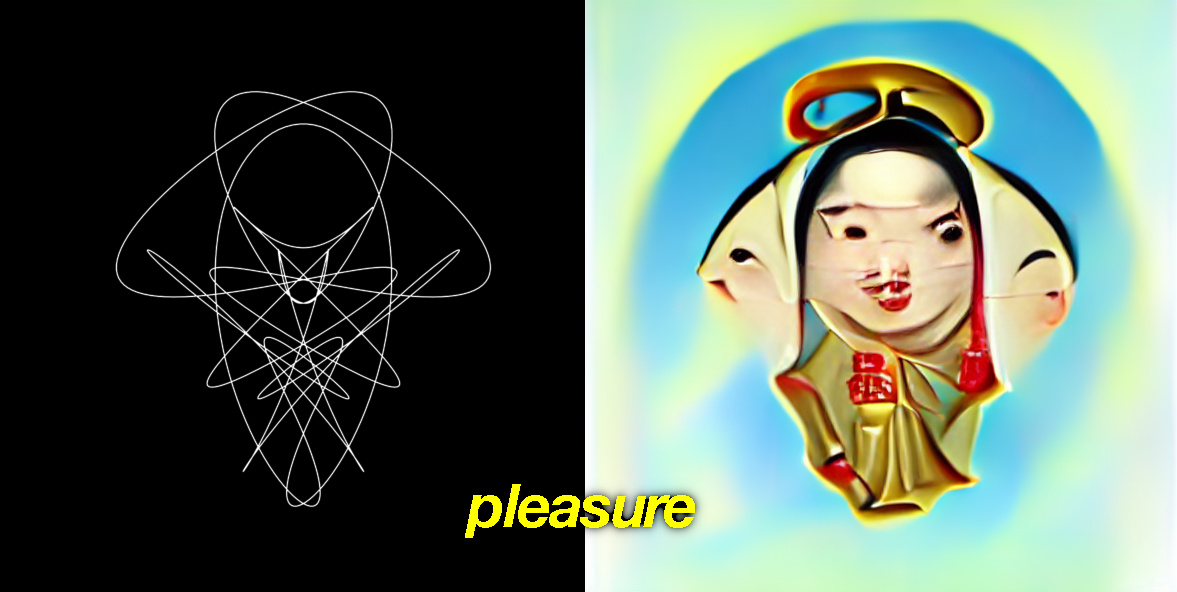 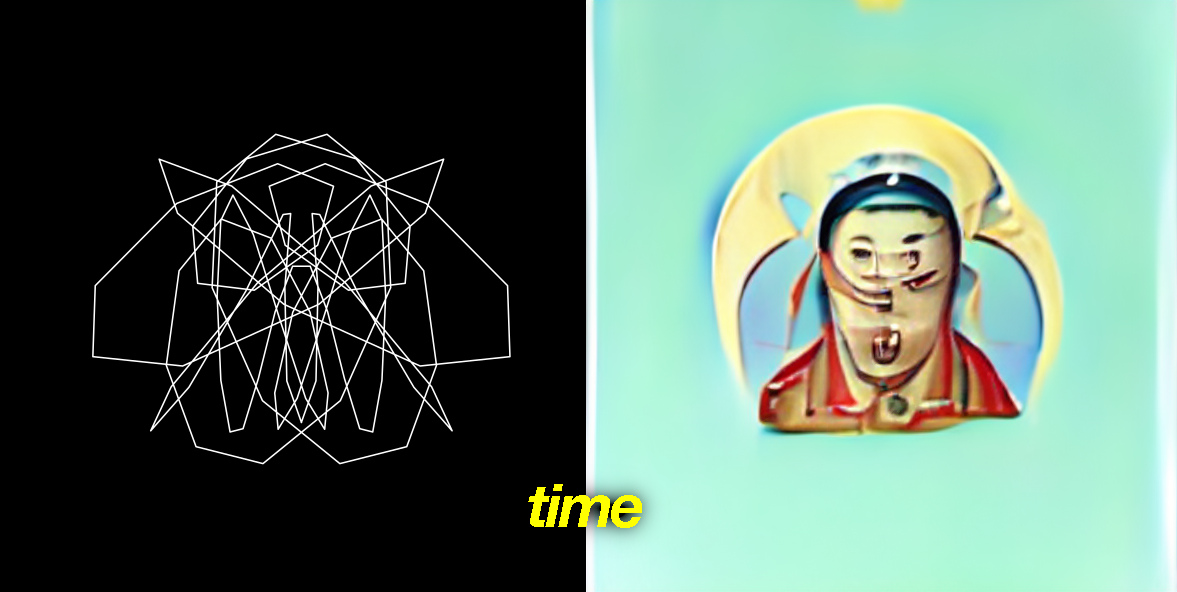 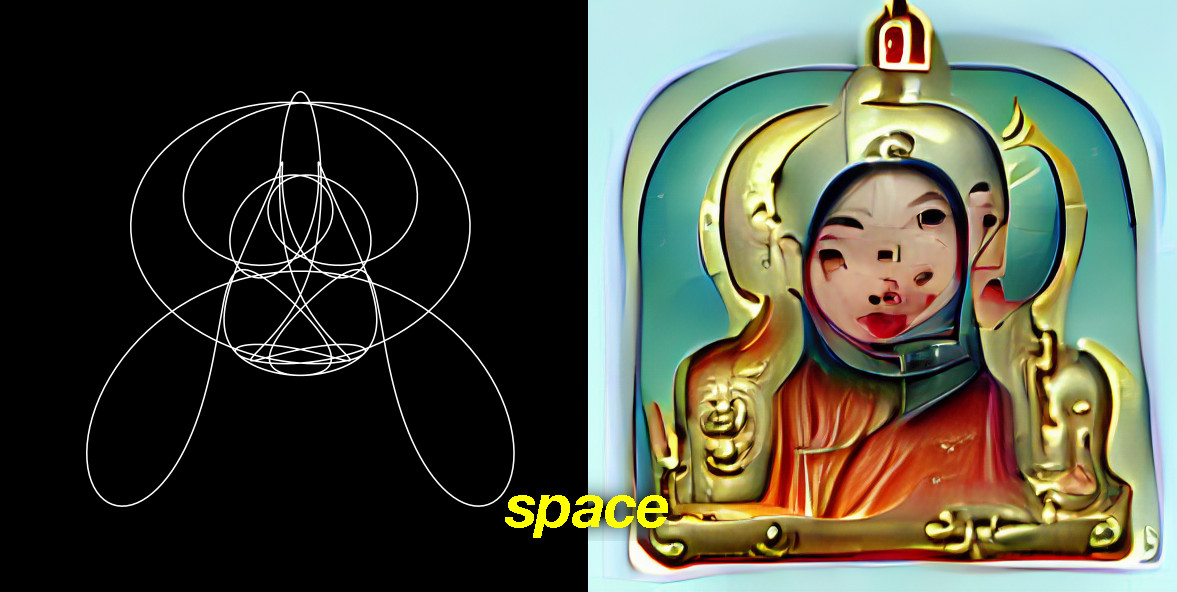 In order to touch the divine wisdom contained within the depths of network's latent space, in a less obstructed and non-figurtive maneer, a special meditiational device was constructed.

A pentagonal pyramid construction is made of aluminum pipes and custom, 3D-printed joints. Pyramid sides are partially covered with a semi-opaque textile featuring an asemic, partial representation of the GPT-Neo latent space. The peak of the pyramid is decorated with a custom aura tuning-device. An iPad running an audio-visual experience is located in the center of the pyramid. A visitor sits on a cushion in front of the iPad and inputs their intention in form of a concise sentence. The system, driven by the GPT embedding space, translates the sentence into an audiovisual meditation object (Kasina), based on the network's internal interpretation of the words. The object is an embodiment of network's numerical representation of the given intention. The object is to be contemplated in meditation state, that supported by a binaural beat constructed of tones whose harmonics are tuned to the same numerical representation of the intention. 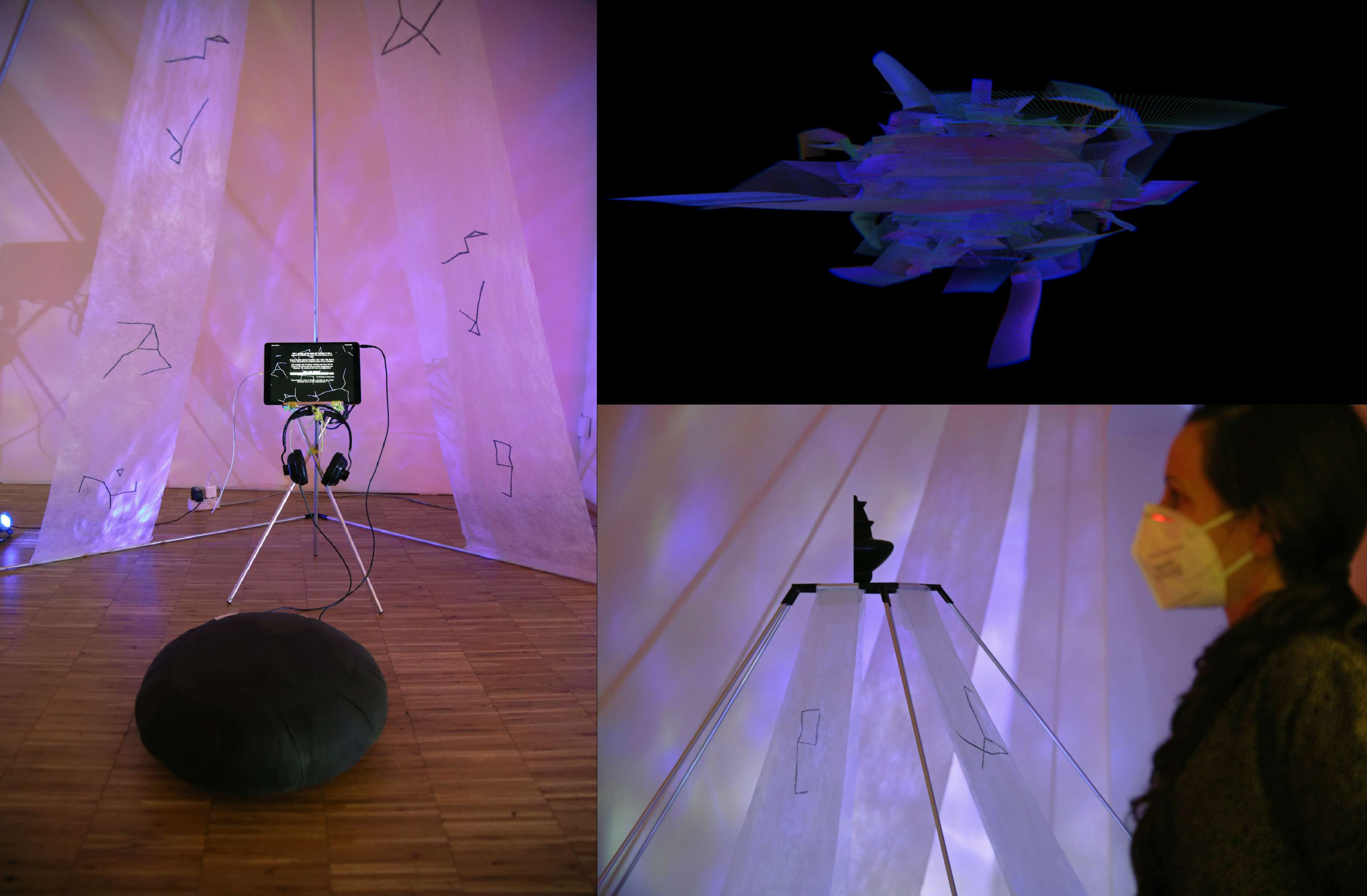 "It is the year 2047. Due to the rule of the populist governments, the Paris Climate Accord goals were hardly met. The temperature rise is about to reach 2 degrees within the next 3 years. There is not much that can be done about it. You are listening to an independent leftist radio station streamed online. The news program is being broadcast. The presenter is going through a brief of the news from around the world. He is talking about an ongoing build of a computational megastructure hosting a data center in Andalucia, where since a decade ago, the process of desertification leaves the area progressively more and more uninhabitable.”

L.S.D. had the pleasure to contribute a guest podcast for the Sonic Utopias program at Movement Radio, Athens, hosted by Daphne X. The podcast is a 1h long sci-fi radio play featuring experimental electronic music and a fictional interview discussing a speculative new generation of GPT-derived language model that developed a form of human-like consciousness. The interviewed scientist - the professor leading the lab responsible for the new groundbreaking development - answers a number of questions about the nature of research and its outcome. One of the most intriguing aspects of the research is the technology for accessing the latent knowledge of the model through mind-altering sonification experiments.